Hypothesis: Any relationship between any two people lasting longer than a month will have at least one long-running argument that spans the entire course of said relationship. 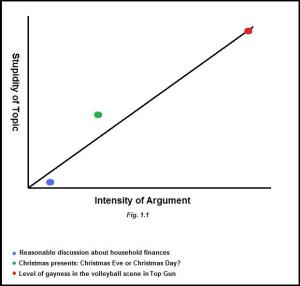 Example 1: The parking lot outside my office does not have delineated parking spaces. A co-worker of mine (I will call him Patrick, as that is his name) showed up one morning at the same time as me. I pulled into a spot next to the one he was backing into at a glacial pace. At halfway in the spot, I saw him mutter something and pull out to move several spaces down. I shrugged and gathered my stuff to go inside, but he caught up with me.

“You cut me off,” he pouted. “I was backing into that spot.”

He pointed back at the space between my car and the next one, asking testily how he was expected to fit his car in there. I looked at the sizable empty space.  I looked back at him. I looked at his car, a Ford Focus. I asked him which breakfast cereal he’d gotten his driver’s license out of, hazarding a guess that he was a Cocoa Pebbles kind of guy. Things only escalated from there, with a day-long argument involving impartial observers being pulled away from their desks to look at how I’d somehow prevented him from putting a mid-sized car into a space spanning roughly the size of Iceland. (Alright, maybe not Iceland. Equatorial Guinea, then.)

That was roughly two months ago. Now as we get coffee from the break room, he narrates his every movement to make sure I don’t cut him off. I tell him that his car, like so many other things in his life, is not as big as he thinks it is. I anticipate that this will continue until one of is fired or killed.

Example 2: My parents, desperately in love as they are, come close to divorce at least once a year over one of the following things:

Example 3: I have not even the words to get into the debacle from my relationship with J, but I assure you that if you ever play the word “za” in Scrabble for 24 points and triple word score, it’s probably best if you leave before the cops show up because shit is about to get very real indeed.

Conclusion: Long-running arguments provide a sense of comfort and familiarity in a relationship, a home base to return to when other conflicts get too hard to deal with. It can be about nostalgia, foreplay, or just plain fun, but the fact is that a relationship needs at least one good conflict to be able to survive.

Alternate conclusion: People are sort of dumb and za is NOT A WORD.